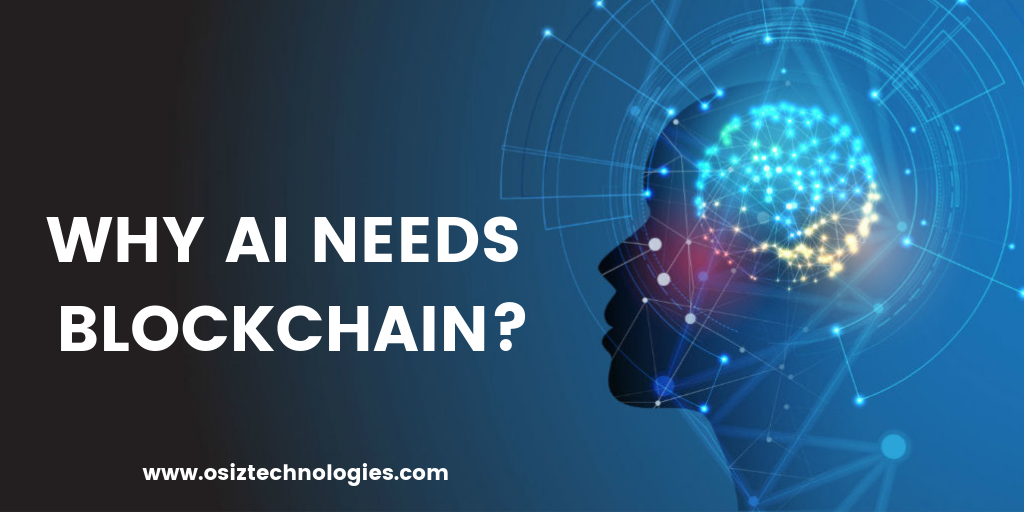 Blockchain and Artificial Intelligence (AI) are the highly discussed technologies that capture the attention of every futuristic individual. Both technologies have their own perks and individual technical complexity, but the experts believe that combining both the technologies together will have a serious impact on the business world in the coming years. It has the capability to support businesses, start-ups, and entrepreneurs, with high profits through enhanced security, trust, and privacy. Now let us explore how the combined use of two technologies could significantly transform the techno world and digital business.

Before getting an insight into the synergistic impact of the two disruptive technologies, let us understand what exactly is Artificial Intelligence and Blockchain technology.

What is exactly AI?

Artificial Intelligence (AI) is one of the concept of computer science which focuses on the development of intelligent machines that work and react as humans do. This amazing technology allows the machines to learn, analyze and make intelligent decisions similar to humans. This technology exists even before the invention of blockchain and is almost used by people everywhere in the world. But they were not aware of the fact that its name is AI. It is spread everywhere around us and makes everyone’s life and works more simple and easier.

Have you played with kids barbie doll or talking tom like toys? Those toys will repeat the sentence you say or even responds to the questions you ask them. Have you wondered how it is possible? This was made possible using a simple concept of AI. The voice will be recorded and the toy will be programmed in such a way that it answers according to the questions we ask.

So, this is what AI is. Any human task performed by a machine or program is Artificial Intelligence and it has not only created a massive effect on our day to day life and business but also become an essential part of the techno ecosystem.

Blockchain is a technology that was initially developed to store and track the Bitcoin transactions among the users in a public ledger. People were not aware of the technology and its usage, so it was not adopted by businesses in the earlier time. But then the world was moving towards digitalization and people slowly started to realize the benefits of blockchain while few industries have integrated the technology into their business for various purposes like ownership tracking, digital trust, voting rights and more. The essential feature that enhanced the hype to the blockchain is decentralization, transparency, security, privacy, and immutability of data which is recorded and distributed to the connected node in the peer-to-peer network.

Challenges and Threats of AI

As how a coin has two sides, there is surely a positive and a negative side in everything present in the globe. Though AI has a promising future and gives exciting benefits to the digital environment, it is also a source of skepticism and has certain threats.

The mechanism of AI, why it is being processed and what it does is still a black box in the organizations. People unaware of the technology and fail to understand how the decisions are made. Provability is the mathematical certainty behind AI predictions, which stays at the darker side of the organization. Transparency is missing and hence there is no way to prove that the decisions made by the AI are right and clear.

Next to Provability, data security and privacy become another issue with AI technology. AI applications generally depend on the millions of data to learn, analyze and make smart decisions. Even the more sensitive and personal data will be collected by machine learning (ML) to make better decisions. This paves the way to the creation of serious issues like data breach and identity theft. Since the data are stored on a centralized system, the possibility of data to be hacked is high.

Despite this, AI also has an inherited problem, algorithm bias. The machines are either trained with what has to be followed, at what circumstances. Proprietary algorithms will be used to identify people who are called for a job interview, people who bail granted or to determine those whose loan is sanctioned. But if the bias is hidden in the algorithm which fails to recognize important decisions, it might lead to unfair consequences. For example, in Google photos, if the camera missed the mark on racial sensitivity, the photos of a person are wrongly stored in the folder of someone else, providing the wrong result.

To keep the point precise, the challenges and threats of AI are as follows.

AI and encryption become a perfect match as the data in blockchain are cryptographically secured. It becomes ideal for storing sensitive and personal data, which is used by AI to make a smart decision. The blockchain database stores data in an encrypted way, which can be unlocked only with a private key. Here, AI has an algorithm to work with the data even when it is in an encrypted state and make things more secure.

The patient’s records can be stored in an encrypted way in the blockchain. It can be viewed by anyone from anywhere in the world and this helps the patient to get connected with the doctor or healthcare provider instantly. Here, if AI is integrated along with the system, the doctors can verify the scan reports and diagnose the patient’s health better. With blockchain, people can view the patient’s medical history along with scan reports and other diagnoses done through AI. This will surely help the patient with better treatment from their comfort place.

Using AI, people get a recommendation for the most viewed products. But the most sensitive issue here is that the people’s personal information is stored in a centralized database, which is easy for hackers to hack. To secure sensitive and important data from hackers, blockchain can be integrated. Blockchain will store all the personal data of the customers in a decentralized database encrypted with private keys. AI can learn the data without decryption and this will secure the data from unauthorized users.

In the supply chain business, AI is used to manage inventory, track logistics and maintain the record. Since a lot of data is stored, it becomes difficult for humans to audit and track the products. Also, if any product is damaged when in transit, it is not possible to find who is the reason for the cause. If blockchain is integrated, the complete system becomes transparent and more secure. AI and Blockchain make the supply chain system more efficient and simple.

The possibility for the blockchain is not simply in recording transactions in public ledger, but also has the possibility to revolutionize AI technology. Blockchain could reshape the future of AI with decentralization, transparency, immutability, and security. Blockchain cryptographic algorithm makes the AI industries to combine with Blockchain.

If you have any further queries, feel free to contact our blockchain experts!