The X11 is an algorithm that is a chained proof-of-work (PoW) hashing function helps to implement the darkcoin protocol now which is renamed as DASH. In general, X11 was developed in order to utilize it as the algorithm for cryptocurrency development. This is because, it provides an inherent resistance that has the time to ASIC which is described as an application specific integrated circuits.

The idea of the darkcoin development made real by using the more complex proof-of-work X11 algorithm in which it substantially enhances the duration of time for ASIC that is able to perform the mining efficiently by developing X11 algorithm. To produce and secure a block by mining CPU and GPU stay competitive and remains forward. 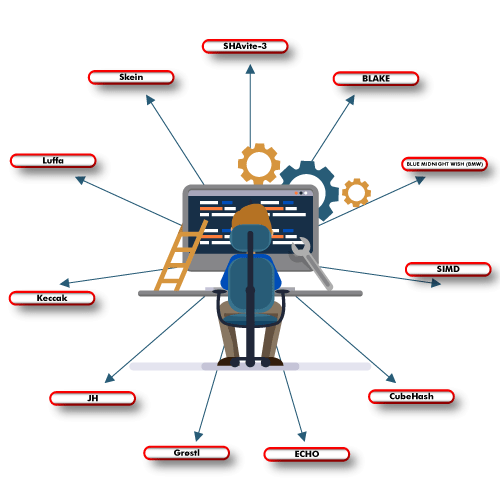 By combining 11 individual hash functions, X11 works as a single algorithm. When a single value is submitted, the starting first function reveals a hash in which it is submitted to the further next function that produces another hash. This function flow works as a process in iteration to generate a crypto currency.
To state, the X11 algorithm comprises of the following 11 hash functions and thus it acquires a name X11.

As it is a known fact that X11 is relatively a new mining algorithm that helps in gaining some reputation by scheduling a time when ASCIs is released for scrypt-based cryptocurrencies. As scrypt is also a mining algorithm that is supposed to act as a decentralized process in mining and creation of crypto coin. Many detriment in scrypt algorithm can be found and overcome in the creation of hardware by mining various coins like litecoins, dogecoins and more scrypt coins in a very fast manner. This algorithm utilizes 11 hash functions which is really very secure to make use of it starting from the Blake algorithm to the SMID algorithm that is required to create coins with the guidance of CPU functions.

As X11 Algorithm comprises of two amazing quick hashes for both GPU’s and CPU’s. It protects GPU’s overheating by utilizing expensive graphic cards that is less prone to heat and maintains cooling. The reason is using this algorithm, graphic cards will not require that much power to process and mine the coins.

In this algorithm utilizing graphics card, the effectiveness of a coin generation enhances the quick development. Due to the graphics card availability, it requires less power that significantly reduces the electricity cost which makes it unique when compared to other algorithms.

As mining of coin is not such an easy work to perform though many algorithms are utilized. It seems to be more complication than SHA-256 ASIC implementation, X11 prevents the ASIC miners in proceeding a short term for longer period of mining using CPU/GPU users. Hire our adroit and experienced professionals to execute your dark coin protocol with proof of work hash functions that stay competitive, offers inherent resistance and remains forward. Engage with us for innovative unique solutions and hassle free process.