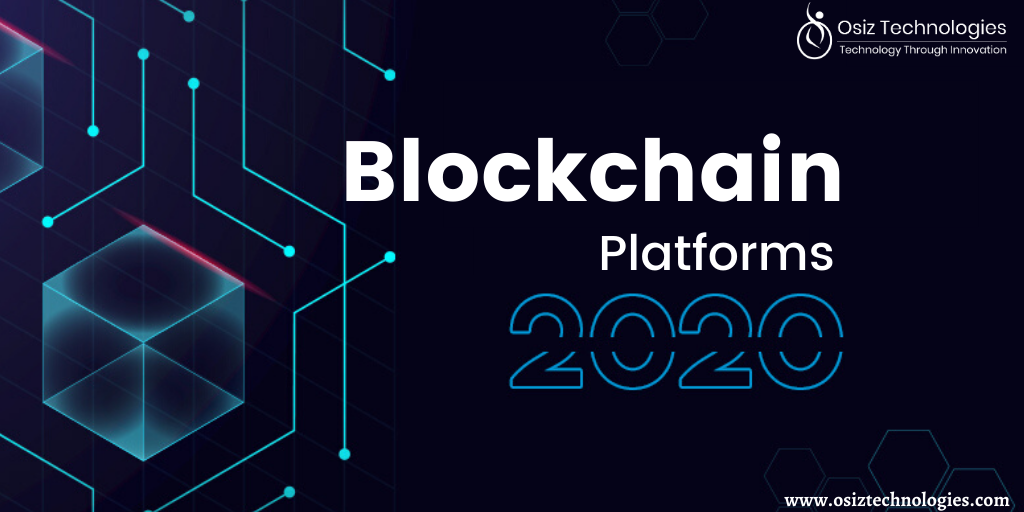 Hope, peoples of this modern era has well known about what is blockchain, blockchain use cases in business and so on. For them and all, it is pivotal to grab about blockchain platforms, their types and why it is. So let’s dive in and attain what each sort of blockchain platform will offer for your business.

Here is the list of top 10 blockchain platforms to look for in 2020.

As well, the best platform for the developers for creating decentralized applications and democratic autonomous organizations (DAOs). Ethereum furnishes secure smart contracts and cryptocurrency trading and much more contrast than bitcoin protocol.​

At last, Ethereum, the consideration of many which assuredly become the industry-leading blockchain platform for the enterprises to build enterprise-grade apps.

Hyperledger Fabric, another best blockchain platform, what's extraordinary in it? The sole blockchain platform which let to build blockchain applications on a modular architecture. On the other hand, this platform furnishes various technological advances that are decisive for the smart application development for industries such as finance, supply chain, manufacturing, and so on.

The only platform which offers both decentralized hosting and decentralized applications storage with the capability of smart contract. Bedsides, Hyperledger Fabric blockchain platform is chiefly designed for permissioned networks, which enables participants in the network to take part in the blockchain. Amazing, right? Henceforth, this is the reason behind why enterprises and companies invested in the Hyperledger Fabric to build enterprise-grade applications with the blockchain platforms.

Why OpenChain blockchain platform is? Initiating this query is notable because it makes everyone go crazy on what makes openChain more special. Right? Let me explain what's special in it. OpenChain, a secured open-source distributed ledger technology platform by Coinprism is well fit for the organizations that desire to preserve and deserve their digital assets.

With the peer-to-peer network and single-point control to validate payment transactions and online asset exchange, it worth considering this as one of the best blockchain platforms. To point out, OpenChain works on the partitioned consensus that’s why all the transactions are free of costs and each transaction on the ledger is validated by an asset owner or by a digital signature.

Multichain, the blockchain platform is the best choice for the instant building an deployment of distributed ledger applications. While in comparison with other technologies platforms, this lets for better performance and app scaling. The prime advantage of this MultiChain blockchain platform is, there is no need to learn a new programming language for developing smart contract software solutions and applications.

On the other hand, Multichain blockchain platform is consistent with Bitcoin and its main strength is its open-source platform. In the developers phase, this platform is utilized to develop multiple key-values, time series or identity databases on blockchain technology. As well, it is also good for the programs encrypted archiving with sophisticated data sharing levels and timestamping.

EOS, yet one m way to secure and ease the way people exchange, buy, and trade datasets on smart contracts. EOS is an open-source network

Based on the decentralized technology concept which offers the capability for the end-user to perform various tasks on the EOS platform. Without any payment, the user can avail of all the benefits of a dApp based on EOS.

EOS blockchain platform carries out a consensus with the utilization of proof-of-stake algorithm and also have their own community forum as EOS forum enabling developers to discuss their queries related to the blockchain technology.

Ripple blockchain platform specifically fit for cross-border payment solutions and best-known among the community of payment providers, banks, and corporates. It permits banks for direct transact across national borders.

Ripple, the best blockchain platform for the utilization of both large-size business institutions and individual users. It has been adoptive by significant financial institutions for its ease of certain cross-border payments that also make it one of the most sought-after blockchain platforms in 2020. Ripple permits for the global payments through “XRP or Ripple” which is a fabulous form of digital asset for cryptocurrencies like Bitcoin and Ether.

Stellar, a distributed ledger network under blockchain technology furnishes a fast, and cost-effective cross-border payment solution to business enterprises and individuals. Through the utilization of the stellar blockchain platform, building mobile wallets and smart banking tools like the Paypal online payment sphere is possible for developers.

It is possible for the stellar blockchain to set consensus without utilizing the closed system for recording financial transactions. Companies like ICICI Bank and RippleFox undergo the Ripple blockchain platform to boost the cross border money transfers and payments process.

R3 Corda, an open-source distributed ledger blockchain platform which let businesses to directly transact with smart contracts. To point out, R3 Corda operates on the permissioned network that permits only authorized participants for accessing certain data, not the absolute network. It embellishes the privacy level with its digital records access control.

R3 Corda blockchain platform does not accept cryptocurrency or token-based payments and lets only authorized participants for the payment data accession. As a matter of fact, it is the best blockchain platform for the financial industry but now it is applicable for various industries like supply chain, healthcare, and government organizations.

J.P. Morgan’s Quorum blockchain platform is the most preferable blockchain platform for businesses and financial markets. This is the reason behind That’s why many financial companies indulging this in their operations. It makes your transactions private by cryptography with its distributed transaction ledger system. Quorum has gained strong support from the developers’ community based on privacy and decentralization principles.

In general, Monero is the most preferable blockchain platform in the cryptocurrency markets which works as a privacy token and it is much like Bitcoin. The best blockchain platform with a greater level of transactional privacy works on three different privacy measures to sustain the users' anonymity.

The initial thing is the Ring signatures which permit the sender to hide data & details among the group of users. The next is Ring confidential transaction which secures transactions by absolutely hiding the data, payment origin stn address and trustless coin generation. The last is stealth addresses which let the sender build a one time address for a single transaction that is generated by the user randomly.

Similar to the OpenChain, the Neo blockchain platform uses blockchain smart contracts to manage digital assets which also facilitates the P2P exchange of digital assets and currencies without the demand to add third-party exchanges.

To mention that, the Neo blockchain platform has its own native currency called “Neo”. This lets you pay transaction fees on the Neo network to run your app. The Neo infrastructure influence several forms of digital assets and you can also utilize digital certificates to create your application on Neo network securely.

Hedera Hashgraph, another blockchain platform to build enterprise-grade decentralized applications. This platform is particularly designed for blockchain app developers who desire to build a trusted place for utilizing digital currencies and digital platforms for online payments.

If you prefer the Hedera Hashgraph blockchain platform, additionally, you will receive a secured platform for managing all your cryptocurrency payments without any third parties. It offers a high level of security since it works on an asynchronous byzantine fault tolerance algorithm. With the smart contracts functionality, Hedera Hashgraph employs the Solidity language to build an absolutely new sort of application for your business firm.

Hyperledger Iroha, the best blockchain platforms specifically to build modularized distributed ledger system which supports both Linux and macOS and widely utilized to build secure and scalable dApps through the IoT and supply chain solutions. It furnishes a small set of commands that aid in the common form of digital assets and digital identity management.

Are you having the notion to build your next business app with a blockchain platform and unable to decide where to outsource your work?

Stick With our Blockchain Experts