A View of Top 10 Web Development Framework in 2020 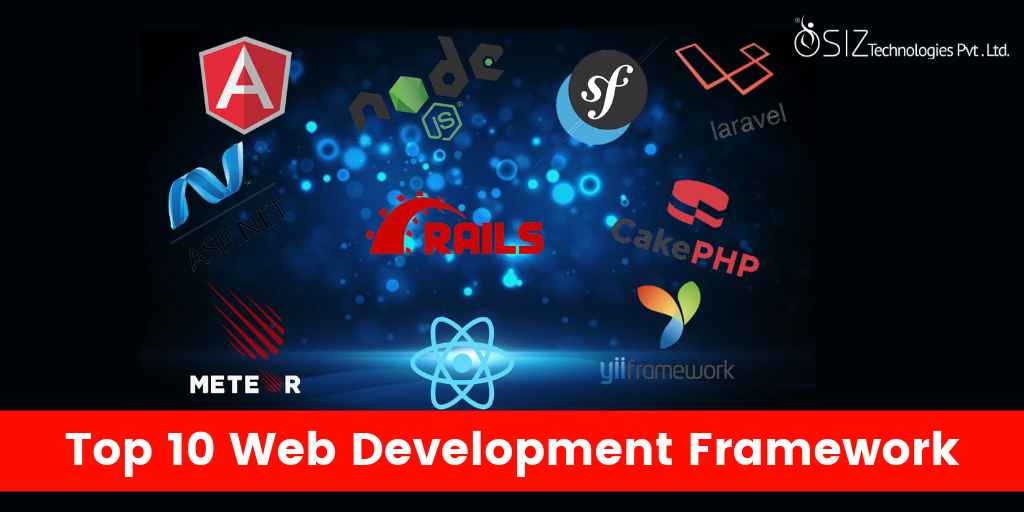 Angular JS is simple to you, If you have a bit update with the latest web development technologies. An open source web framework specifically designed for single page web applications through MVC architectural pattern. Being a front-end framework, it absolutely deals the webpages efficiently. This framework experiences a massive hype and an entire renew of the first version, after the Angular 2 release. Now, it comes with another amazing version, Angular 4 which is much better than its preceding version. As a result, this Google product is well merited to be in the top web development framework’s list and conceive as a vital part of web development.

Laravel stands unique and top while coming to backend web development technologies or frameworks. Since 2011, it constantly offering a blazing path to the developers with its inception. An open source PHP web framework which undergoes MVC pattern is planned to build state-of-the-art web applications. To point out some features of the Laravel framework is of modular packaging system with dedicated dependency, application deployment and maintenance that provides a way to access relational databases. As a result, these are some of the reasons behind why it’s regard as the best PHP framework and insists businesses to hire Laravel developers for their web development.

ReactJS, an open source JavaScript library retained by Facebook is widely used to develop web applications’ user interface. This specific web framework was fabricated for an intent to build large applications with data that deviates again and again over time. On the other hand, React JS is coming up with something fascinate in near future as React Fibre which is a current reimplementation of Reactjs’s core algorithm. It is the completion of over two years research by the React team which add credit to the framework.

The main idea of Node.js is to utilize non-blocking and event-driven I/O, that persist lightweight and efficient against real time applications with massive data running on distributed devices. In short, it is essential for certain reasons to fill specific needs. Not only as a framework but also an absolute web development environment, It remains as a developers’ favourite framework for a while and suspected to stay this way long enough. Likewise, It aid to build ascendible and fast network applications which can handle huge connections simultaneously with high performance. Finally, if you need an entire JavaScript environment with all the tools, the Node JS development may be perfect for you.

At present, the technology which boom apace is AI&ML. Specifically, AI is everywhere, when it comes to customer behavior or an image editing app. At the same time, AI chatbots are flourishing fast and obtaining more from human interactions. In this case, a question arises, “What can be a better way to build such amazing apps with a JavaScript top web framework?” Obviously, Tensorflow an unique framework specifically to build AI apps that supports a large community. Henceforth, if you are planning for AI, then Tensorflow is the right choice for you.

Similar to the Laravel, Symfony is a PHP web framework that fit well to the complex enterprise. The current version Symfony 3.1 framework is a quite stable framework. Symfony 3.1 that aid full stack developers to build scalable websites that are reliable to deviate the business requirements. To point out, Symfony can integrate and work with several largest open source platforms like PHPBB, Piwik, and Drupal. It comprises of a group of PHP components, an application framework, a community and a philosophy, and all of them work simultaneously to aid developers to progress the common goal on the web. In short, the reasons that make Symfony a sophisticated framework for web development.

ASP.NET, a Microsoft built web framework that is extremely valued by developers as an omnipotent tool to build dynamic websites, rich web apps and web portals for its inception from 2002. it lets the developers to utilize any language supported by the .NET, since it is built on the Common Language Runtime (CLR). At present, there are huge amount of developers as well as software development companies that prefer ASP.NET as their desired web development technologies. Therefore, if you have a hang for Microsoft technologies, then you must hire ASP.NET developers for your web development .

For the rapid software development, preferring Meteor JS is the right choice. The reason behind the faster web development is utilization of both front end and back end. A full stack JavaScript (JS) framework, built with the group of packages and libraries that enchained together. To point out, this framework links with the concepts and libraries of other frameworks which results in the fast and easy building of applications. The another wonder is , the framework with these amazing traits requires less code and flexible. This symbolizes that, the app is much scalable with less bugs and higher quality.   Therefore, it can be beneficial for you to hire Meteor developers for your next project.

Cake PHP written in PHP is an open source web development framework is vastly popular in the market from its origin. This is build based on the association data mapping and MVC architecture. Likewise the Meteor JS, CakePHP also aid the processionals for structured and rapid web development. The wondering thing of utilizing CakePHP is availability of elaborated documentation and pragmatic guides with the framework which results easy code. Thence, achieving more with less code is possible with this framework. At the same time, it permits reuse of code that make rapid web application development.

Create your own website with us in your desired frameworks. Stick with us